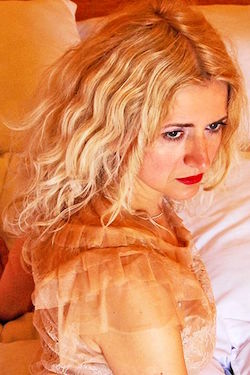 Born in Macedonia, Lidiya Georgieva graduated in fashion design at the Parisian ESAA “Duperré”, with a French scholarship and a recommendation from M. Christian Lacroix. Also holds a Master`s degree in Graphic Arts.

After she won the European Contest of Young Designers Award in Paris, she started as assistant at Pierre Balmain, continued working as a responsible designer for Rochas, and other fashion houses in France.

Lidiya Georgieva founded her label in 1999, presenting her work in designer shops in France, UK, Italy, Japan and USA. Her collections consist of handmade knitwear, cocktail dresses, accessories, and items printed in limited editions. Strongly influenced by the luxury and couture universe, her creations are inspired by the grace of the silhouettes of the 20’s as well as from music.

The label had a support from the international press and her creations have been worn on the Cannes Film Festival and other major occasions, by known actresses, pop singers such as Madonna, models and fashion journalists.

Lidiya Georgieva, also works on costume design for theatre, modern dance, cinema and in 2012 she started exploring the universe of home design as well.

Currently, apart from her personal work as a designer, she is working as a Professor in design at the Ss. Cyril and Methodius University in Macedonia.